I recently started some research  for my residency, beginning with the search ‘Female deities in Buddhism’. Here is brief synopsis of what I found:

I discovered Tara who’s earliest text references date from the 5th century and earliest image has been found in Cave 6, Ellora Caves, cut into rock dating back to 7th century. Worship of Tara was well established in India by 8th century. 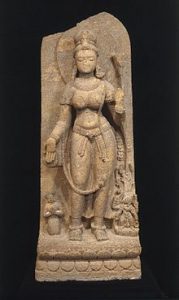 Tara takes many forms and also colours. Most prominently, there is white Tara and green Tara- both representing different aspects.

Tara also takes the form of Saraswati- in Hinduism she is the daughter of Durga and wife of Lord Brahma. Saraswati, stands for ‘one that flows’- fluidity of all kinds including speech, writing, song, music and thought. She also represents knowledge, arts and wisdom. 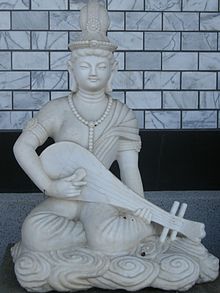 Tara appears in forms across China, Japan, Indonesia, India and Bengal. In China she appears as Kwan Yin.

The images, often sculptures, are amazing. She is sometimes in a meditative pose, sometimes standing strong, sometimes graceful holding a sitar.

Also of interest was this quote, from a speech made by the 14th Dalai Lama, speaking about Tara at a conference in 1989.

‘There is a true feminist movement in Buddhism that relates to the goddess Tārā. Following her cultivation of bodhicitta, the bodhisattva’s motivation, she looked upon the situation of those striving towards full awakening and she felt that there were too few people who attained Buddhahood as women. So she vowed, “I have developed bodhicitta as a woman. For all my lifetimes along the path I vow to be born as a woman, and in my final lifetime when I attain Buddhahood, then, too, I will be a woman.”

This initial piece of research is most welcome- a female buddha does exist! Well of course she does. How could she not?! As with many other stories of women, she is just not as prevalent within mainstream culture of today.

I have always wanted to see the temples in Southern India that have the ornate carvings of women/ goddesses- I now know why. They are most likely Tara or Saraswati.

But where does this leave me and my residency now – have I found my answer already?

Before I started this research, back when I submitted the proposal for the residency, I drew an image – as my own alternative to Buddha. It was a sketch over several sheets of paper. At the next studio session I asked myself how I develop this. A painting didn’t feel right for some reason. I happened to have some clay in the studio- and that’s what called me. So I moulded first trying to recreate my 2d drawing, but this didn’t feel right- so I remoulded. After 3-4 hours I arrived at something which I was happy with- although it was a little strange- not the beautiful thing I thought would come out. But I know that you have just have to follow the creative process- and let it create what needs to be created.

This is the work I wanted to develop in the residency- and still do.

Who knows maybe Tara will appear in her 21st century form?