The #sackslavery exhibition is getting closer- October 18th. Yesterday I did more work on the freedom piece- adding flowers to the wings. Did I tell you about the wings? You’ll see when it’s finished. 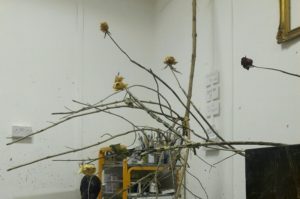 Also since my last post I have found some music that will go with the piece. It’s from the talented composer, Simon Rodgers, who has a studio in the same building as me.

When I heard the particular track I’ll be using I cried. I also realised that I want people to cry when they see the work. Modern slavery is such a harrowing issue- mainly affecting women, who are forced into situations often involving physical and or sexual abuse.

Back to the stream about collaboration- being in certain spaces opens doors and new collaborations. This happened not just with Simon the composer but also with a tech wizard, Ashley Croome, in a different building I also inhabit- a tech hub. So I now have a ‘raspberry-pi’ bit of kit that will play the music on a loop, but only when someone approaches, as it has a motion sensor. 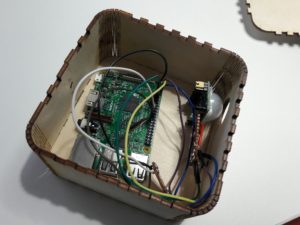 I have never really collaborated over my art, it’s usually a solitary activity often around painting, but this work has been about connection and collaboration, a combination of people and talents – this has all happened organically. And its not over yet.

There is still a key bit of construction work that needs to happen for it to stand up- I’ll need some help with that too. With so many wonderful people in the world I’m sure to have another collaborator soon.