Reflecting on the residency 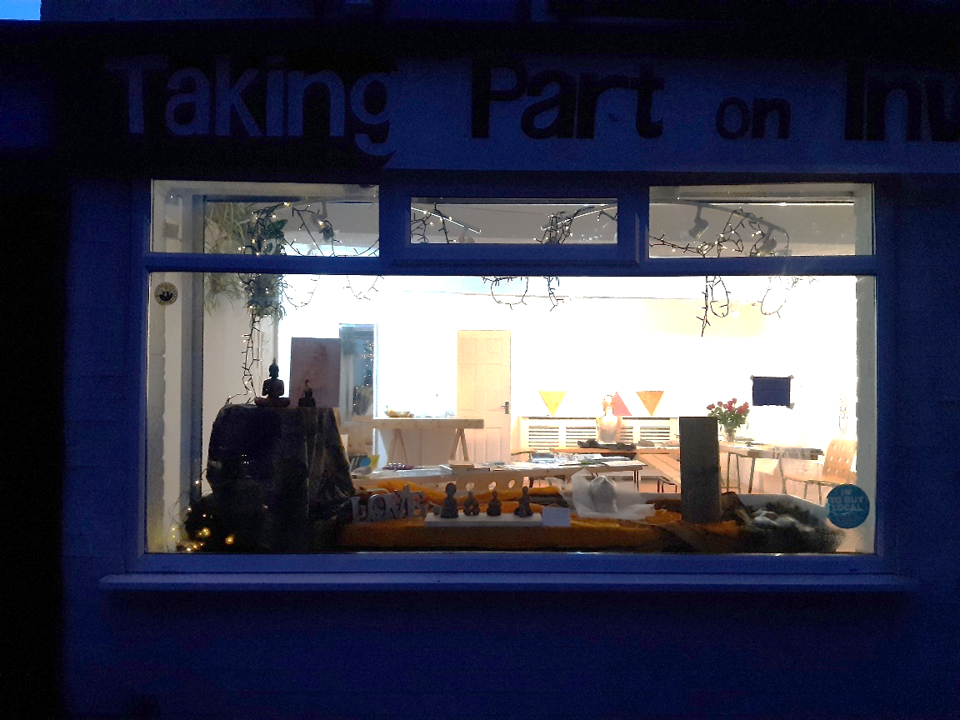 The residency is now over what did I learn, discover, create? Did I create an image of universal love or come even close? Have I somewhere else to turn instead of the Buddha?  I discovered so much it’s hard to say it all- but here are some of the main discoveries

Most significantly, the conversations I had revealed there are people out there, just like me, a little lost, searching, believing in something that doesn’t have a shared name, doesn’t have a physical form or a set of rituals associated with it. These people have turned away from religion because they found it oppressive in some way. They come from many different backgrounds, are both men and women and in all age groups. I heard stories of religion letting them down at crucial points. But people still turned to prayer when things got tough, as many of us do.  Who is that we prayer to?

Archaeological finds indicate that 30,000 years ago, in the Neolithic period, people believed that the ‘super power’ was feminine. There are small carved statues all over the world, portraying a female figure. These statues weren’t fertility symbols, that’s patriarchy talking, they were symbols of what people believed to be the creator of everything- the Earth Mother, Great mother, Shakti. This wasn’t just in the Africa, Asia, Egypt, it was across Europe and Celtic cultures too. (See work of archaeologist Marija Gimbutas)

This was a time when women were revered seen as having super-powers as they were the sex most closely related to the supreme creator of everything- which was believed to be a feminine force. Patriarchy began to erode matriarchal structures from the bronze age and here we are today – with only a smattering of matriarchal societies left and 52% of the rest of the population consciously or unconsciously believing men are the stronger, more able sex, believing that the masculine is superior to the feminine.

My research into Buddhism led me to Tara, a female buddha who got lost along the way. Also, a book called ‘Cave in the Snow’ which is the story of Tenzin Palmo, a Buddhist nun. She shows quite clearly how she was denied access to learn from higher scriptures because they considered her unable to reach enlightenment due to her sex. Tenzin Palmo is challenging this today and has pledged to reincarnate always as a woman until she reaches enlightenment.

Third big find. A strand of Hinduism names the creator of all things ‘Shakti’- a feminine force.

Shakti is not to be a confused with the goddesses- she is at the top of the tree! She takes the form of several goddesses – each of those helps us to cope with life. Kali, when we need to the strength to fight injustice, Goddess Lakshmi for attracting wealth and abundance- we have so many wants and needs there has to be multiple goddesses.

The human race can not survive without men, so of course there are men and some of these are deities too. But Shakti is the ultimate feminine force of everything.

Something about my process

There were times as worked, that called on her to support me, to reveal herself to me, to us. (‘Tuning in’ is something I do when painting- so this isn’t a new thing). There are 3 particular works I could mention here- the clay sculpture of the head, the light sculpture made from sacking, some drawings I made and where stories also came to me to accompany them.….think there is something in those.

I was working in a shop fronted space, where people could come in at any time. The window display was an important vehicle to attract people into the space.

I had at least one visitor per day and our conversations very often influenced the work created. It no longer focused on my need it became something broader as I realised that this resonated with other people too. Were the female forms I was drawing relevant to other people? I considered more contemporary images that may appeal to younger people searching…

The engagement wasn’t always positive so after week 1, I had to redefine my boundaries and change the window display to attract a different kind of visitor- ideally more women.

The workshop mid-way through, ‘Feminism and Spirituality’ was a significant point in the journey. It was suggested by someone I didn’t know who had resonated with the title of the residency- ‘When Buddha’s not enough’. The depth of conversation and honesty in that setting was something special. The creative element involved creating our own versions of the Neolithic Great Mother or Venus from clay. Everyone created a different form meaningful to them.

Did I come up with an image, a structure that could replace the Buddha?

If I had to replace the Buddha with any of the objects I made- the way I feel now it may be the abstract rock I created designed to be touched. I like the idea of laying my hand on there, sitting quietly and using that to connect.

I am however drawn to the human form, so there is something about the sculpture of the head that I made…

The light sculpture feels special. It feels like it needs an audience- the corner of my lounge is not right for it. It has a grandeur about it that demands a space to itself. It’s beautiful in the darker hours of the day and when photographed the colour of the light shows up differently to the way the naked eye sees it- I like that bit of magic, mystery, accidental camera wizardry.

I want to continue the journey which I think now is about reclaiming the feminine. I’d like to pick up the threads of belief from Neolithic times and start to sew with it ….see where it takes me. There is a picture book in my sketches that wants to happen and I realise I love clay! There is something about community and the wandering tribe…

When I was writing the first draft of this blog yesterday, this came through at the end – so I want to finish with that

‘I am drawn to write the word ‘Love’ here. She is in all that is ‘love’ there is a purity and simplicity in love- where you feel love you will feel her.’